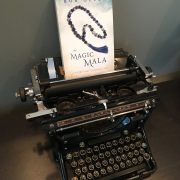 The Universe has an extraordinary way of making things happen for us. This book might be one example. I never intended to write this book. In fact, I never intended on writing any book at the time I wrote this one, especially a novel.

Now I don’t mean to say that I hadn’t pondered the idea of writing fiction prior to now. It’s true that I thought about writing a book like The Celestine Prophecy by James Redfield, The Way of the Peaceful Warrior by Dan Millman, or even The Alchemist by Paulo Coelho. However, I was always too left-brained about the process of writing to consider a novel. I wanted to follow the formulas of fiction writing, write an outline detailing the story chapter by chapter, and basically have the whole story mapped out before I began writing. It’s no wonder that I never got around to writing such a book. I was overwhelmed.

Then came my birthday on the third of May. My wife, Melissa, gave me a cool keyboard that looks, sounds, and feels like a vintage typewriter, only it’s Bluetooth-capable, so I was able to write my manuscript in Microsoft Word on my iPad Mini. There’s something special about working on an old typewriter with the round keys, the clickity-clack sound, and the tactile feeling of typing with these keys under my fingertips. It inspired me to write. So I did.

As I wrote, I had no intention of writing anything that anyone would see. I just wanted to play with my new keyboard, and so I played. I remembered something that had happened in my own life that I always imagined would make a good fictional story, so that’s what I wrote. It’s based on my true story, but with some alterations. I even had the title, The Magic Mala.

When I began, I only knew three things about the story, three simple events that happened in the main character’s life: he found a mala, he adjusted his intention to be more specific, and he lost his mala. With this in mind, I began using my keyboard. Because I had no intention of ever showing what I was writing to anyone, I did not outline, have any plan, or follow any fiction-writing formula. I just wrote to enjoy my new keyboard.

As I wrote, my mind was suddenly flooded with ideas. Storylines, characters, and teachings flowed out of me as if they were being poured into my head. I wrote for about eight hours the first day, only stopping because I needed to eat and spend some time with Melissa. The next morning, I awakened excited about what would happen to the characters next. I had no idea, of course, so I was eager to write again to watch their stories unfold. And their stories unfolded all that day, and the next day, and the next, for twenty-eight consecutive days.

Melissa normally encourages me not to work on the weekends. Yet on the first Saturday, she said to me, “I assume you’re going to write this weekend, so I’m going to make plans for myself.” We both recognized that something special was happening with this book, and we wanted to let it flow. I wrote every day on weekdays and weekends until the manuscript was completed.

It was especially surprising to us that I wrote the book spontaneously because almost exactly one year prior, I had felt ready for a new book or creative project but wasn’t drawn toward anything in particular. I thought, “Well, it’s almost summer, maybe a topic will come to me in the fall.” It didn’t. And it didn’t come in the winter either. Finally, in late spring, I got my birthday present. I played with it simply for fun and out popped this book.

I believe the Universe wrote this book through me. Some call this kind of writing inspired writing. I was in the perfect mindset for the Universe to impress me with this story because my mind was blank and open. I had no plan. I was merely writing to write.

This truly is a story that can change your life. While I wrote it as a novel, there are many stories within it that really happened. The teachings are real, meaning everything you learn in this book about creating the life you desire is absolutely true. I hope that you are able to utilize what is taught here to claim the life of your dreams in the same way that I did in my own life using these exact principles and techniques. You have my best wishes for a magical life.

Learn more about the book at BobOlson.com.

PS, The photo in the picture is actually one of my old typewriters, not the keyboard I used. The keyboard Melissa gave me is here.