My Magic Mala Moment went like this: I was at a local, collegiate baseball game with my nephews this summer. We like to attend at least a few times each summer. This particular night I purchased raffle tickets for the 50-50 raffle. This is a raffle where they sell those blue paper tickets that are about a half-inch wide and an inch long. Half the money goes to the winner and the other half goes to the organization (hence the name, 50-50). Normally it costs five bucks and they give you 20 tickets. This night, because it was threatening rain and less people had attended, they were giving out 40 tickets for five bucks…a big long string of 40 blue tickets.

So there I was with all these tickets in my hand when my sister-in-law, Caroline, said to me, “That string of tickets looks like a mala. You should use it like mala beads to win.” And I was like, “Why didn’t I think of that?” So as I held each ticket between my thumb and forefinger, I repeated “I won!” for every ticket. In fact, I went through the string of tickets 3 times to get a similar effect as the 108 beads on a mala. So there I was with my nephews watching, “I won. I won. I won. I won, I won…”

Well it’s probably no surprise to you that I won. I won $134.50. Oddly, I kind of knew I was going to win. It was just a feeling that overcame my body. And of course my nephews were astonished. The 11-year-old ran up to collect the winnings with me. He was jumping out of his skin in excitement. Then, before we had any time to really celebrate, the rain came pouring down and everyone in the stadium went running for their cars. I didn’t get a chance to buy everyone hot dogs and pizza, but it sure made an impression on the power of setting an intention and repeating a mantra. 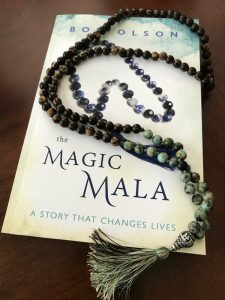